Here at Norbury the children’s safety and well-being is at the centre of all that we do . Our outstanding practice has meant that we are a Knowledge Centre and share good practice amongst other schools in Harrow and London. One of the UK’s leading charities, Barnados are liaising with Norbury as a model of good practice.

We offer opportunities for professionals to observe safeguarding  lessons  across 3 phases, EYFS, KS1 and KS2 , for adults to receive  FGM Awareness Training in their own settings and also have the capacity to plan bespoke training.

Our inspirational students are empowered to share their knowledge with other schools and are keen to attend assemblies to raise awareness of Norbury Schools safeguarding slogan “MY BODY MY RULES.’

My Body My Rules

Pupils are aware and have an understanding of My Body My Body My Rules underpins our Safeguarding knowledge  from Nursery – Year 6. Within EYFS and Key Stage 1 our youngest members of the school community base their learning on PANTS, a NSPCC initiative. The learning is then extended in Key Stage 2 to FGM awareness.

“There are many Myths given for undergoing FGM. For example, it makes you cleaner, healthier or a good person but we know that none of these are true. it is simply an act of violence and it must end because all children have the right to be protected from harm.

We have had lessons about why FGM continues and it seems that the people supporting FGM just don’t have the right information.

FGM is happening in the UK too and as we are the next generation, it is very important that we know the facts about what exactly it is, so that we can break the cycle.

It is time we stood up and break the cycle.” 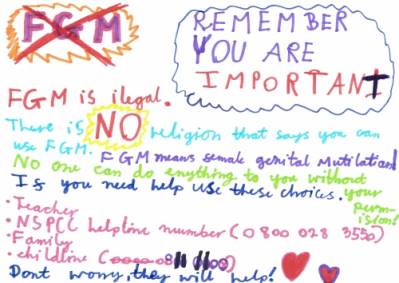 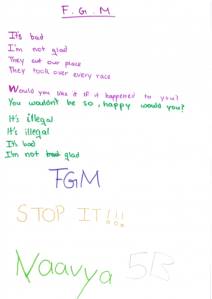 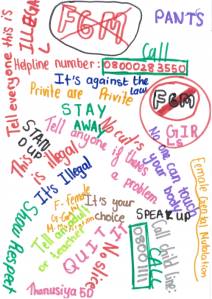 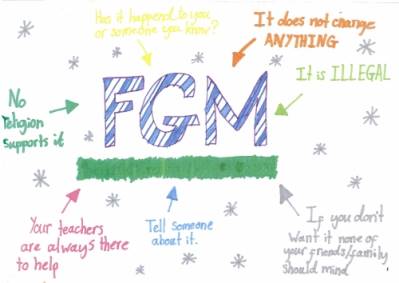 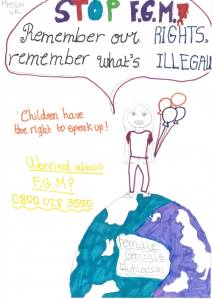 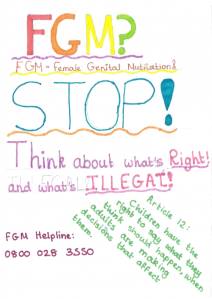 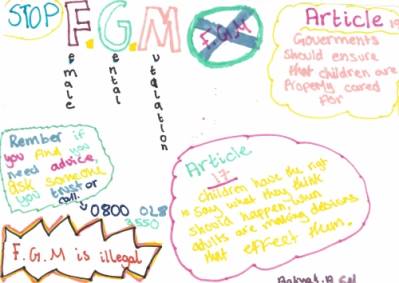 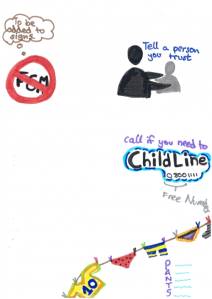 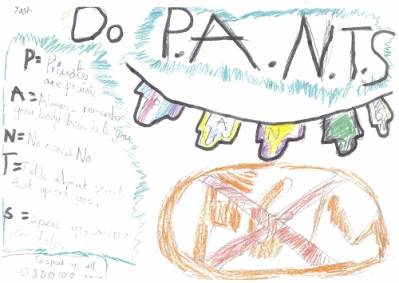 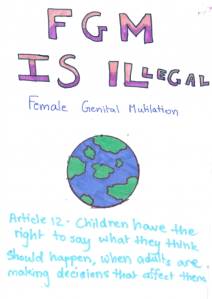 Talk PANTS and The Underwear Rule

Pupils at Norbury School in Harrow are the first in the country to start learning about FGM in Year 3, aged just 7. The school, in partnership with the NSPCC, starts raising awareness of children’s bodily rights with their ‘PANTS’ programme in Reception.

Last year there were 70 newly recorded cases of FGM in the borough.

Jessica and Dhalasho speaking with Mayor of London about our FGM & Safeguarding work, felt very listened to, crucial when 10yrs old!

In January 2017 I had the privilege of hosting the London Assembly conference on tackling FGM. Our conference provided an opportunity for practitioners with a responsibility for responding to FGM in London to come together to share insight and best practice. Our Chair, Hibo Wardere, spoke of her personal experience of FGM and our speakers showcased some of the ground breaking work taking place across London to help end FGM, including the inspirational work taking place in Norbury School in Harrow, the National Health Service, the Metropolitan Police and social care. We heard that while practitioners are now more confident about challenging FGM in London, FGM remains an issue both professionals and communities find difficult to discuss.

Louise Browning, Headteacher at Norbury School, Harrow, showcased the pioneering work taking place to raise awareness of FGM at Norbury.9 She stressed the importance of the school’s role in protecting children, including from FGM. She outlined how Norbury uses the NSPCC Pants campaign, which aims to help children keep safe from abuse, and the safeguarding procedures it has in place to do so.10 The need to monitor attendances, absences, holiday requests, known family information, trends in behaviour and trends in achievement was highlighted. Louise told the conference that all pupils at Norbury are included in FGM awareness lessons, and parents are supportive of this. Norbury ensures that its FGM policies and procedures are well known, and has established a multi-agency community focus group, including links with its local women’s centre and local mosque. It has also established professional trusted relationships with the police and children’s services

“Norbury School had a large population of pupils from countries known to practise FGM. The head teacher decided that the school should raise awareness of FGM and identified two key colleagues, both who were well respected by pupils, parents and the wider community, to lead on this work. They recognised that they needed to bring communities on board with the work rather than have a ‘top down’ approach. They also wanted to be open and honest about facts, based on an educational approach, rather than ‘blame’ and ‘lecture’. They used the NSPCC PANTS programme as a basis for their FGM awareness programmes. The PANTS programme sets out a simple message for children that parts of their body covered by underwear are private, their body belongs to them and that no-one has the right to make them do anything that makes them feel uncomfortable. The school had six months of regular meetings with stakeholders including health services, children’s services, their parent group, the voluntary sector, the police, cluster schools and charities to understand the facts, the various educational approaches, training and engagement with communities. Following these meetings the school created their own FGM lesson plans, resources and approaches which they were shared with their stakeholders and modified as required. All Year 5 & 6 pupils’ parents met the school and reviewed the resources before the lessons were piloted and INSETs were held for their staff, governors and parents. The class groups for the lessons were not single-sexed groups until year 6, where they split the boys and the girls in order to see how the questions developed. This was a good step as they found that the boys were very curious and some very angry that this could be done to their sisters, cousins, friends. The school also created a playground display and made it clear that they were educating and not blaming, whilst remaining clear about the law in this county. By the end of the summer term, they had delivered the FGM awareness lessons to all their year 4 – 6 pupils and have the PANTS programme under way across the school from Nursery to year 6. To celebrate the voice of the child, the school have created a working party of Year 3- Year 6 children to raise awareness of FGM across their borough. The children have presented to both professionals and children and even take questions from the floor. The school has strong links with their cluster secondary schools and Year 10 students from those schools have supported the delivery of PANTS lessons to their Year 1 children.”

“What has been very successful in areas where it has been tested and tried is when sexual health education has been taught to very little children. We gave a recommendation of the Norbury School in Harrow, which has one of the best practices. Children as little as seven or eight are taught the NSPCC model, “PANTS”. They can identify their private parts, and can tell when abuse has happened and what abuse looks like.”

Extract from Ealing Stepping up to health – 29 edition (Page 6)

“At the Ealing Safeguarding Best Practice Exchange in April, staff and pupils from Norbury Primary School in Harrow shared their whole school approach to tackling FGM. A group of primary schools went to see their FGM preventative strategy in action. Its success, the senior leaders explained, was down to the long and important parent consultation which involved talking to small groups of parents from the very start, and encouraging them to raise awareness as well as help design how pupils at the school should learn about FGM and staying safe. In the new academic year, Ealing’s Health Improvement Team will continue to work with Norbury Primary school and the six Ealing schools to develop an Ealing Whole School approach to FGM.”

“Following a visit of the HT to Norbury Primary School in Harrow, from September 2016, Oldfield will follow this school’s example of using the NSPCC’s “PANTS” programme in PSHCE lessons at age appropriate levels from Y1-Y6, as currently at Oldfield it is only in Nursery and Reception.”